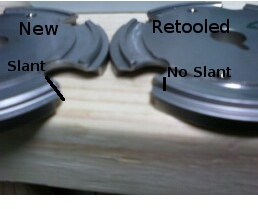 Life was great with the new press after I had “fine-tuned” it with the new Ez-Ject base plate and the #45 shell plate I ordered from Midway.  A couple of issues had disappeared, with the new system.  The retainer spring would faithfully drop into the “eject groove”, which is the area where the retainer spring ducks out of the way of the incoming brass and allows the finished round to eject.  Previously, there were occasions where the spring would just continue to ride on the rim of the baseplate, causing the round not to eject properly and me loosing my rhythm and therefore the efficiency that this press is supposed to provide.

As mentioned in the previous post, I had sent back all 5 of my old shell plate to be retooled to the new Ez-Ject system.  About 7 weeks later the retooled shell plates were back and so was the eject problem.  So I did a deep dive on the new vs. old shell plates and found the following difference:

Basically the slant allows the retainer spring to more easily drop into the the “eject grove”.  At first I thought it was a mistake, after all I had paid $10 each to retool the shell plates, and figured that Hornady had forgotten to add this 45 degree slant, but it was not a mistake.  I was told that my shell plates were tested and that I should use some sandpaper to remove the possible burrs.

With no help from Hornady, I consulted a friend of mine who is a manager in a machine shop.  “No problem”, he said, “we’ll add the slant.  It’ll be done before you even get up in the morning”.  Unfortunately, that was not the case.  The employee that was working on adding the little slant discovered that none of the shell plates are truly round (new or old).  All of them are somewhat “oval”, so just slapping the shell plate in a lathe was not the answer.

In the end I ended up using a carbide cutter on an industrial “Dremel” to add the 45 degree angle by free hand.  The good news is that now they all work.  Only on one shell plate there was one area where I didn’t add enough slant, so that was the area where it would mess up in the press.  I marked the area on the shell plate and fixed it with my regular Dremel at home.

If you are experiencing issues with your retainer spring breaking frequently, you might want to try this modification.  I have not had a bent/broken retainer spring since.