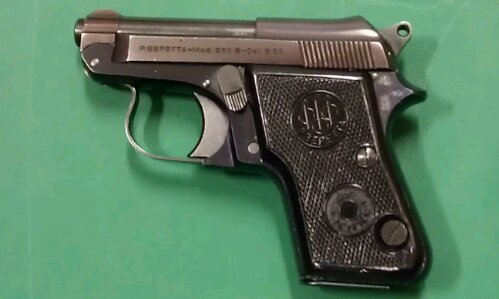 Last week I decided to clear out every gun that I have never shot. This included 2 rifles and 1 pistol.  All of these guns were “impulse purchases” that I *never* shot, breaking my long term rule of “never selling a gun”.  One gun I sold outright and the others I traded.  In this horse trading, I ended up with a Beretta 950 also known as “Jetfire”.  Here is a picture of the mini James Bond gun:

So, let’s continue this review.  Happy about my latest acquisition, I ran to the local Meijer’s store only to find out that they no longer carry .25 ACP ammo.  Even worse, they had a clearance sale on ammo that I had missed!  Undeterred, I found a box of .25 ACP Remington’s at Gander Mountain.

The next day, I headed out to the range to give the new gun a whirl.  Small barreled guns are usually considered “gut guns” and therefore I was not expecting any great accuracy from this gun.  However,  after the first 3 shots at 21′ I noticed that the grouping was very good.  The recoil was not bad, and the trigger pull, due to the Jetfire being single action, was very nice as well.   Then I decided to go for the bulls eye and I was shocked by the results:

With this grouping I would definitely attempt a “Hostage Shot” if needed, despite the size of the gun.

Do you have a “mini” gun which is more accurate than expected?  Leave the make and model in the comment section below!

A friend of mine, Craig B., just sent me this article: