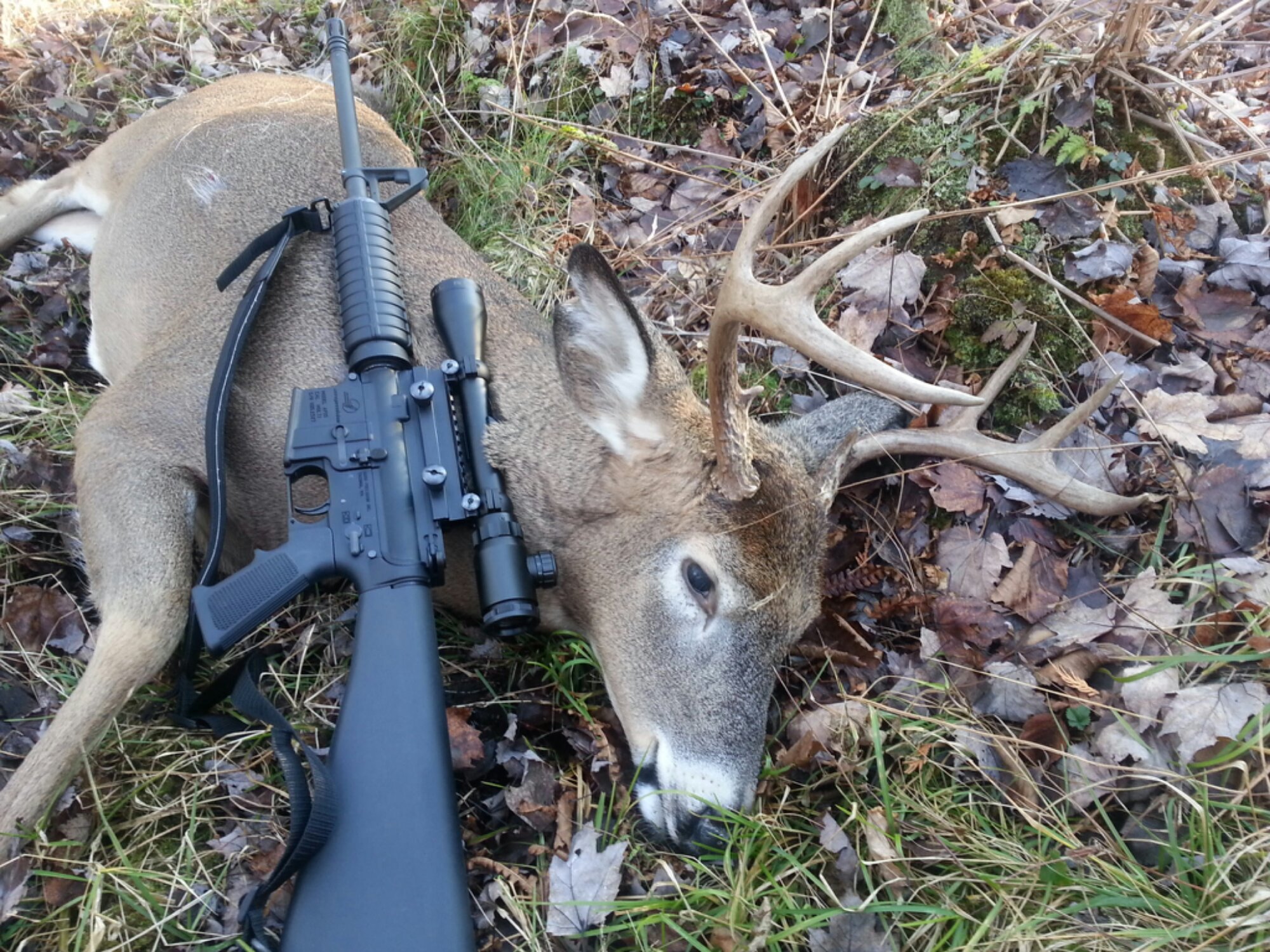 First off, the AR15 is the best hunting rifle I’ve used for the area I hunt in — a swamp with dense vegetation and islands of trees.  Navigating through the swamp is difficult and lugging a heavy Remington 7400 or a Browning BAR around becomes a chore — even when slung over the shoulder.  The length of the traditional hunting rifle becomes a drawback in this environment.  I can’t even count the times I’ve been accidentally flagged by the muzzle of a fellow hunter when climbing through brush.  The short AR is much less likely to get caught on overhanging branches.

Let me illustrate the weight benefit. I went on a 3 hour still-hunt (only moving very slowly from area to area) and the AR was always in hand vs. slung over the shoulder.  The benefit is that there is very little movement required to aim the rifle and therefore there is less movement that could be detected.  I could never do this with one of my other non-AR rifles.

Also, mag changes are very simple and very quick.  If you already jumped to the conclusion that I’m just taking pot shots at deer, this is not what I was referring to. I like all my shots well placed and I like to have my rifle at the ready, fully loaded, should it be needed.  In USPSA we do this all the time, reload before you run out, so why not do it in a hunting environment?  The mags I am using are plugged to 4 rounds and I carry one in the chamber, so every round counts.

Below is the first deer I shot with my AR.  After taking a difficult shot between several trees, I lost sight of the buck.  As it turns out, the single bullet dropped the buck on the spot and he fell into a depression in the ground out of my sight.  After a couple of minutes, and not detecting movement, I did a tactical reload before approaching the deer. I wanted to ensure that I had a fully loaded rifle should I need it.  This is something I would have never attempted with one of my other rifles as the mag changes are much more involved.  In the end, the first bullet was enough to drop the deer on the spot.

On to the ammunition,  I was using PRVI PARTIZAN ammunition:

This ammunition seems to be very well made.  I’ve not experienced any reliablity issues with it.  However, in the AR, the M4 cuts will cut the soft tipped lead bullet.  While hunting, there are many times when you may need to load and unload your rifle without firing it, so I would recommend dropping the first round in the chamber to avoid distortion of the bullet by the M4 cuts.

Last but not least, some pics of my harvest!