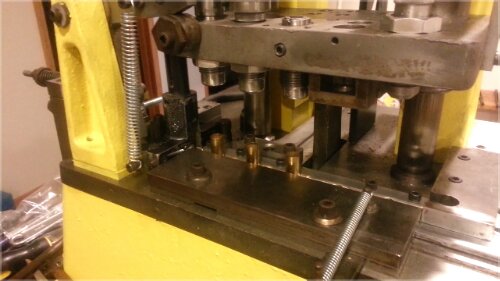 As a competitive shooter I see reloading as a necessary evil and not as a hobby.  This is contrary to other family members and friends that see reloading a hobby in itself and have no problem reloading 500 rounds on a single stage press, which will last them through the entire nice weather season here in Michigan.  Then there is us, the competitive shooters, that blow through 500 rounds in a weekend between practice and competition. Last year, my friend Craig and I rescued (for a price) 4 Tri-Standard reloading machines from a barn.  At the time I knew nothing about them, besides that one was set-up for .45ACP another for .38 Special, one for .357 Mag and the last one for 9mm.  A internet search provided little results.  However, the thought of possibly reducing the pain of reloading made the purchase so enticing. This article will hopefully assist someone else in their search for answers of the Tri-Standard.

Picture of the partially rebuilt unit:

Stay tuned for updates to see how the rebuild progresses!

P.S. I recently received an email from the son of the guy that bought the company Tri-Standard from Joe Dercks in the 1960’s who said that he had several of these machines and is willing to assist with parts or general questions. If you need to get in contact with him, his name is Randy Gillespie, send me an note below and I will provide you the contact info.

P.P.S.  Here is an interesting exchange I found searching for Joe Dercks on http://www.starreloaders.com/forum/index.php?topic=262.5;wap2 :

steven d. ogden:
Ken, i was until 1999, but I also loaded commercially for nearly 25 years.  I stopped in 1995 and disposed of most of my equipment but I have never lost the interest in presses, particularly progressives.  I am now in pursuit of an old Dercks machine.  I met Joe Dercks back in the late 60’s.  I believe that he invented the first reasonably priced and decent automatic loading machine.  The machine was available in both motor and hand power (by a crank).  If I get it, I will try to send you a picture.  Remember the Newcomb in 38 I sold you about 1978?  I still have the other press in 45.

Kenneth L. Walters:
Joe Dircks.  Now there is a name not many know.  I met him when I was 32, 30 years ago.  He use to vacation at a little hot springs somewhere in new mexico.  Went there to meet him.  I remember that he had retired, the first time, the year I was born, 1943.

Joe, of course, made two straightline progressives, the Dircks and the Tri-Standard.  Still have his pictures of those, I think.  The Dircks, as I recall, was totally automated.  Electric motor to power it.  The Tri-Standard, made some years later, was hand powered.   Don’t remember the company history anymore.

One thing you might consider is calling Tony Sailer.  Last I knew he still lived in Owen Wisconsin.  I think that Tony got rid of most of his press collection but you never know.

armac:
Are you interested in selling Wemco Machine? Cordially ARMAC

Kenneth L. Walters:
I got an e-mail recently from a fellow whose father bought the rights to the Tri-Standard.  Apparently he has several operational machines.  Don’t know if any are for sale but…